I wanted to take a sec to share some recent Bolt Action activities that I’ve been involved in!

Rich at Chicago Terrain Factory and I ran our 2nd year of the Kursk battle at Adepticon. Check out his coverage of the event, it is excellent. We had a blast this year and I think the folks who played had a great time.

We limited the game to tanks and had a good turn out for each side. Over 20 tanks lined up and going at it. The Germans really held out this time, burning T34s everywhere!

The Fallschirmjager also made an appearance at Adepticon in the Team Tournament. We got stomped by our opponents but had a great time.

I am revising and doing some updates to the Fallschrimjager for Operation Sting 2017. I took them last year and had a good time running them. This year I am building the list around the paratroopers who fought the Canadian 3rd Division in the ruins of Ortona. The list will see a few changes including potentially adding a vehicle to the army, which wasn’t the case with the Monte Cassino version of the army. Last week I picked up the excellent Warlord games Pioneer kit based on the new plastic Blitzkreig kit.  These are a vast improvement over the previous plastic set. The metal parts that allow you to make interesting pioneer models as well are excellent.  These include more equipment on their backpacks, some new heads, and additional and more characterful weapon options. These guys are the latest addition to my force for the Adepticon team tournament which I am participating in with John at Plastic Legions.

I wanted to update the look of some of these guys to give the unit a bit more of a mid-war period look, with camo smocks, and helmet covers.  Three of the models which I modified are shown here to give you an idea what I have been up to. 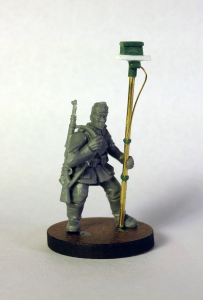 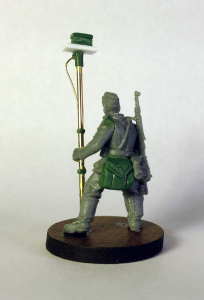 I don’t know too much about the ‘pole explosives’ which some pioneers used blow up hard to reach places.  Some photo reference shows that it is essentially a box on a stick. I added some wiring to give an impression how a pioneer may set the explosive off after put into position.  This is largely my design, I’ve not found any examples of these sorts of triggers on these things, but I get the impression that they are sort of ad-hoc, so they may come in all shapes and configurations. 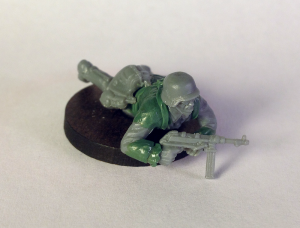 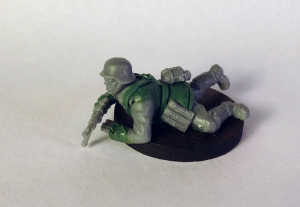 This guy may be a NCO, or simply a trooper with an SMG. He has the camo smock that the Panzergrenadier units were occasionally given, especially as the war went on. 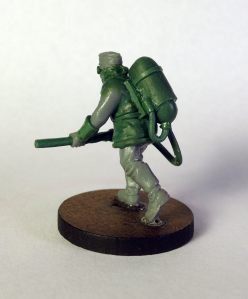 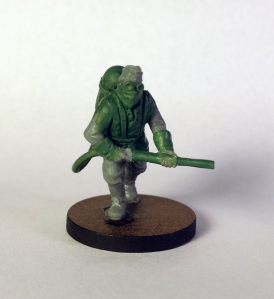 Last but certainly not least is the flamethrower!  I also took some liberties with the design of this figure’s modifications as well.  Its only somewhat modeled after the flamethrower which comes with the pioneer kit.  I made some changes which suited me when modeling this. Now I can run two units with flamethrowers which should be pretty sweet in upcoming games!

These guys are from the first unit for my Norman army. They are a band of levied peasants with spears and shields forced to fight for their lord. These minis are a mix of the unarmored Viking kit from Wargames Factory, mixed with some bits from one of their Saxon kits as well. These models would make great basic line infantry for just about any army from the Middle Ages.

I started with this unit to get a handle on how I wanted to paint the army as a whole. The predominant theme will be blue and white as a quasi-heraldry, in addition to more historical colors for the units (chainmail for the heavy infantry and knights. Dirty jerkins for the pesants). After putting on a quick base coat of various greys, tans, browns, and the contrasting dark blue, I washed the entire model with a mix of dark warm grey mixed with gel-medium. I think its too dark for some areas, and I don’t think I will be doing a deep wash like this for future units. It does give these guys a nice grimy look which fits their station. Occasionally I would use a bit of red or green on the shields to break up the colors a bit.

The round shields are one of the elements that will make the unit stand out some from the rest of the army, which will largely have ‘kite shields’. The spears are brass spears from Northstar, and the bases are laser cut MDF, or similar. I took my time coming up with a basing plan for this army, using this unit as guinea pigs. These are part of a exposition army that will be used at Adepticon, as well as for my personal use. Considering this I wanted the basing to fit anywhere from central Europe to the scrub land regions of the Holy Land. I think that the contrast between the ground and the grasses works great, and when this unit is ranked up it really comes together.

I painted these guys pretty quickly, and with not a great deal of care. They need to work when viewed from about a foot or more away. There are 24 in a unit, and I would like to have anywhere from 3 to 6 units in the army eventually. This means I need to work out a way to crank them out. These models are from a great kit, but some of the detail in the face is a bit hard to pick out once some paint gets on to them. I am going to try to bring more highlights out of their hair in future models.

Some of the fantastic Norman Knights from Conquest are up next!